Mobile or cellular phones are now an integral part of modern telecommunications. In many countries, over half the population use mobile phones and the market is growing rapidly.
Given the large number of mobile phone users, it is important to investigate, understand and monitor any potential public health impact.

Mobile phones communicate by transmitting radio waves through a network of fixed antennas called base stations. Radiofrequency waves are electromagnetic fields, and unlike ionizing radiation such as X-rays or gamma rays, cannot break chemical bonds nor cause ionization in the human body.

Various studies indicate that the emissions from a cell phone can be extremely harmful, causing genetic damage, tumors, memory loss, and increased blood pressure and weakening of the immune system. This is alarming information, and one has to take into account all these factors. 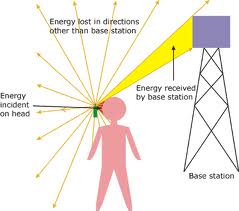 Mobile phones are low-powered radiofrequency transmitters, operating at frequencies between 450 and 2700 MHz with peak powers in the range of 0.1 to 2 watts.

The handset only transmits power when it is turned on. The power (and hence the radiofrequency exposure to a user) falls off rapidly with increasing distance from the handset. A person using a mobile phone 30–40 cm away from their body – for example when text messaging, accessing the Internet, or using a “hands free” device – will therefore have a much lower exposure to radiofrequency fields than someone holding the handset against their head.

In addition to using "hands-free" devices, which keep mobile phones away from the head and body during phone calls, exposure is also reduced by limiting the number and length of calls. Using the phone in areas of good reception also decreases exposure as it allows the phone to transmit at reduced power. The use of commercial devices for reducing radiofrequency field exposure has not been shown to be effective.

Mobile phones are often prohibited in hospitals and on airplanes, as the radiofrequency signals may interfere with certain electro-medical devices and navigation systems.


Are there any health effects?

A large number of studies have been performed over the last two decades to assess whether mobile phones pose a potential health risk. To date, no adverse health effects have been established for mobile phone use.

Though there is no evidence of cell phones causing cancer or any such illness, but the suspicion, or fear of the same is not baseless either. The electromagnetic radiation from cell phones does have a potential link to cancer. The fact that this radiation is invisible, intangible, and enters and leaves our bodies without our knowledge makes it even more intimidating.

Possible hazards:* Scientists say that two minutes of exposure to emissions from mobile phones can disable a safety barrier in blood causing proteins and toxins to leak into the brain, could increase chances of developing Alzheimer's multiple sclerosis and Parkinson's.
* Scientists say exposure to the phones' low-level radiation causes red blood cells to leak hemoglobin and can lead to heart disease and kidney stones.
* Recent studies suggesting a link between cell-phone use and brain tumors, and the possibility that the microwaves could ignite petroleum fumes at gas stations.
* A cell phone unit, or communications tower, has so many of thee radiation emanating gadgets. This can be a problem for its immediate environment

Tissue heating is the principal mechanism of interaction between radiofrequency energy and the human body. At the frequencies used by mobile phones, most of the energy is absorbed by the skin and other superficial tissues, resulting in negligible temperature rise in the brain or any other organs of the body.
A number of studies have investigated the effects of radiofrequency fields on brain electrical activity, cognitive function, sleep, heart rate and blood pressure in volunteers. To date, research does not suggest any consistent evidence of adverse health effects from exposure to radiofrequency fields at levels below those that cause tissue heating. Further, research has not been able to provide support for a causal relationship between exposure to electromagnetic fields and self-reported symptoms, or “electromagnetic hypersensitivity”.
In contrast, research has clearly shown an increased risk of road traffic injuries when drivers use mobile phones (either handheld or "hands-free") while driving. In several countries, motorists are prohibited or strongly discouraged from using mobile phones while driving.

Epidemiological research examining potential long-term risks from radiofrequency exposure has mostly looked for an association between brain tumours and mobile phone use. However, because many cancers are not detectable until many years after the interactions that led to the tumour, and since mobile phones were not widely used until the early 1990s, epidemiological studies at present can only assess those cancers that become evident within shorter time periods. However, results of animal studies consistently show no increased cancer risk for long-term exposure to radiofrequency fields.
Several large multinational epidemiological studies have been completed or are ongoing, including case-control studies and prospective cohort studies examining a number of health endpoints in adults. To date, results of epidemiological studies provide no consistent evidence of a causal relationship between radiofrequency exposure and any adverse health effect. 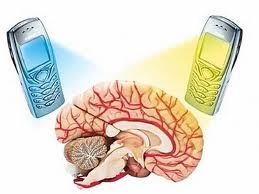 Blood Pressure.It was observed that people using cell phones were prone to high blood pressure. Again, there isn't any concrete evidence of the same.


Headaches, Heating Effects, Fatigue.A study brought out that longer the people used mobile phones, the more likely they were to report symptoms such as hot ears, burning skin, headaches and fatigue.

Memory.
There have been various studies into the connection between mobile phones and memory loss. The results showed that RF could modify signals in the cells in a part of the brain that is responsible for learning and short term memory.

Mobile Phones and Children.Because of their smaller heads, thinner skulls and higher tissue conductivity, children may absorb more energy from a given phone than adults.

Part of the radio waves emitted by a mobile telephone handset are absorbed by the human head.

The radio waves emitted by a GSM handset can have a peak power of 2 watts, and a US analogue phone had a maximum transmit power of 3.6 watts. Other digital mobile technologies, such as CDMA2000 and D-AMPS, use lower output power, typically below 1 watt.

The maximum power output from a mobile phone is regulated by the mobile phone standard and by the regulatory agencies in each country. In most systems the cellphone and the base station check reception quality and signal strength and the power level is increased or decreased automatically, within a certain span, to accommodate different situations, such as inside or outside of buildings and vehicles.

The rate at which radiation is absorbed by the human body is measured by the Specific Absorption Rate (SAR), and its maximum levels for modern handsets have been set by governmental regulating agencies in many countries. In the USA, the Federal Communications Commission (FCC) has set a SAR limit of 1.6 W/kg, averaged over a volume of 1 gram of tissue, for the head. In Europe, the limit is 2 W/kg, averaged over a volume of 10 grams of tissue. SAR values are heavily dependent on the size of the averaging volume. Without information about the averaging volume used, comparisons between different measurements cannot be made. Thus, the European 10-gram ratings should be compared among themselves, and the American 1-gram ratings should only be compared among themselves. SAR data for specific mobile phones, along with other useful information, can be found directly on manufacturers' websites, as well as on third party web sites.
.

THE WHO (World Health Organisation) RULES


* Mobile phone users should limit their exposure to harmful radio frequencies by cutting the length of calls.
* Hands-free devices cut exposure by keeping the instrument away from the head and body.
* Driving cum mobile phone talking should be banned.
* Mobile phones should not be used in Intensive Care Units of hospitals as they can pose a danger to patients by interfering with the working of pacemakers and defibrillators.
* People with hearing aids should not use mobile phones.
* Base stations, which have low powered antennae on their terrace to communicate with cell phones, should not be located near children's schools and playgrounds.

* Cell phones should be used for emergencies, and not for long conversations.
* A small chip-like cell phone microwave radiation protection device is available, which has the ability to absorb electromagnetic energy waves from your mobile phone. It helps in reducing the potential harmful effects of these emissions to the human body.
* Using a mobile headset is a good idea, you don't have to hold phones next to your ears all the time
* Use a hands free mobile car kit while driving, without taking your hands off the steering wheel.

We recommend  that those with implanted devices such as pacemakers or defibrillators keep their cellphones and media players at least six inches from the generator and leads to minimize potential interference. This can be readily achieved by carrying cellphones in the pants pockets or on a belt or purse holster.