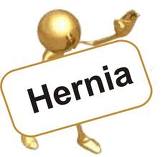 What is a Hernia?

A hernia occurs when the contents of a body cavity bulge out of the area where they are normally contained. These contents, usually portions of intestine or abdominal fatty tissue, are enclosed in the thin membrane that naturally lines the inside of the cavity. Hernias by themselves may be asymptomatic (produce no symptoms) or cause slight to severe pain. Nearly all have a potential risk of having their blood supply cut off (becoming strangulated). When the content of the hernia bulges out, the opening it bulges out through can apply enough pressure that blood vessels in the hernia are constricted and therefore the blood supply is cut off. If the blood supply is cut off at the hernia opening in the abdominal wall, it becomes a medical and surgical emergency as the tissue needs oxygen which is transported by the blood supply.

What are the different types of hernia? 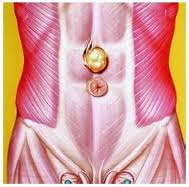 Different types of abdominal-wall hernias include the following:

If you have an obvious hernia, the doctor may not require any other tests (if you are healthy otherwise). If you have symptoms of a hernia (dull ache in groin or other body area with lifting or straining but without an obvious lump), the doctor may feel the area while increasing abdominal pressure (having you stand or cough). This action may make the hernia able to be felt. If you have an inguinal hernia, the doctor will feel for the potential pathway and look for a hernia by inverting the skin of the scrotum with his or her finger.

Surgery is the only treatment that can permanently fix a hernia. However, smaller hernias with no symptoms can sometimes be watched. Surgery may have more risk for patients with serious medical problems.
Surgery will usually be used for hernias that are getting larger or are painful. Surgery secures the weakened abdominal wall tissue (fascia) and will close any holes. Today, most hernias are closed with cloth patches to plug up the holes.
An umbilical hernia that fails to heal on its own by the time your child is 5 years old may be repaired.
Emergency surgery is sometimes needed. The sac containing the intestine or other tissue may become stuck in the hole in the abdominal wall. If it cannot be pushed back through, this can lead to a strangulated loop of intestine. If left untreated, this portion of the intestine dies because it loses its blood supply.
Instead of open surgery, some hernias can be repaired using a laparoscope (camera). The advantages of using a camera include small surgical cuts, faster recovery, and less pain after the procedure.

What is laparoscopic hernia repair surgery?

A number of factors have led to the development of a new method of repair called laparoscopic hernia repair. This technique is an extension of a traditional mesh repair method that was used in patients who had already experienced several hernia recurrences at the same site. Previously, this mesh repair approach had required a separate incision somewhat removed from the target area. However, with the progressive development of the instruments and techniques for laparoscopic surgery, the same procedure can now be done with several relatively small incisions. This allows the surgeon to enter the space behind the hernia defect and place the mesh with minimal injury to the surface of the abdomen. The advantages of this method include coverage of all the potential sites of groin hernia, which reduces the risks of recurrence while also decreasing the amount of postsurgical pain.

What about the use of a laser in hernia repair?

This is a relatively common question. It arises because, for a time, there were some surgeons marketing "laser hernia repair." While a laser may have been used to make the incision and to separate the tissues, the laser has no application in the repair of a hernia. It is impossible to perform the necessary structural repair with a laser, which functions essentially as a cutting tool. Hopes that somehow an incision made with a laser would significantly reduce pain have not been confirmed.

What kind of anesthesia is used for hernia surgery?

The outcome is usually good with treatment. Recurrence is rare (1-3%). 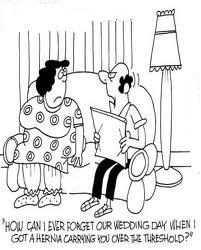