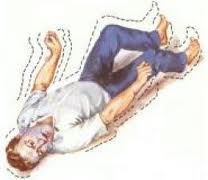 Convulsions are when a person's body shakes rapidly and uncontrollably. During convulsions, the person's muscles contract and relax repeatedly.
The term "convulsion" is often used interchangeably with "seizure," although there are many types of seizures, some of which have subtle or mild symptoms instead of convulsions. Seizures of all types are caused by disorganized and sudden electrical activity in the brain.

Convulsions can be unsettling to watch. Despite their appearance, most seizures are relatively harmless. They usually last from 30 seconds to 2 minutes. However, if a seizure is prolonged, or if multiple seizures happen and the person doesn't awaken in between, this is a medical emergency.
If a person has recurring seizures, and no causes can be identified, that person is said to have epilepsy. Epilepsy can usually be controlled well with medication.
Pay attention to:

The person may have warning symptoms before the attack, which may consist of:

In an infant or child, if the seizure occurs with a high fever, cool the child gradually with tepid water. You can give the child acetaminophen (Tylenol) once he or she is awake, especially if the child has had fever convulsions before. DO NOT immerse the child in a cold bath.

A physical examination (including a detailed neurologic examination) may be normal, or it may show abnormal brain function related to specific areas of the brain.
People with epilepsy will often have abnormal electrical activity seen on an electroencephalograph (EEG). (An EEG is a reading of the electrical activity in the brain.) In some cases, the test may show the location in the brain where the seizures start. EEGs can often be normal after a seizure or between seizures, so it may be necessary to perform a longer test.
Various blood tests and other tests looking for temporary and reversible causes of seizures, may include:
Tests for the cause and location of the problem may include:

If an underlying cause for recurrent seizures (such as infection) has been identified and treated, seizures may stop. Treatment may include surgery to remove a tumor, an abnormal or bleeding blood vessel, or other brain problems.
Medication to prevent seizures, called anticonvulsants, may reduce the number of future seizures. These drugs are taken by mouth.
Some factors increase the risk for a seizure in a person with epilepsy. Talk with your doctor about:
Epilepsy that does not get better after two or three seizure drugs have been tried is called "medically refractory epilepsy."
Sometimes, children are placed on a special diet to help prevent seizures. The most popular one is the ketogenic diet. A diet low in carbohydrates, such as the Atkins diet, may also be helpful in some adults.
Persons with epilepsy should wear medical alert jewelry so that prompt medical treatment can be obtained if a seizure occurs.

Call your doctor or hospital:

Some people with certain types of seizures may be able to reduce or completely stop their seizure medicines after having no seizures for several years. Certain types of childhood epilepsy goes away or improves with age -- usually in the late teens or 20s.
For some people, epilepsy may be a lifelong condition. In these cases, the seizure drugs need to be continued.
Death or permanent brain damage from seizures is rare. However, seizures that last for a long time or two or more seizures that occur close together (status epilepticus) may cause permanent harm. Death or brain damage are most often caused by prolonged lack of breathing, which causes brain tissue to die from lack of oxygen. There are some cases of sudden, unexplained death in patients with epilepsy.
Serious injury can occur if a seizure occurs during driving or when operating dangerous equipment. For this reason, people with epilepsy whose seizures are not under good control should not do these activities.
People who have infrequent seizures may not have any severe restrictions on their lifestyle.

Generally, there is no known way to prevent epilepsy. However, proper diet and sleep, and staying away from illegal drugs and alcohol, may decrease the likelihood of triggering seizures in people with epilepsy.
People with epilepsy should always take any prescribed medication and wear a medical alert tag.
Keep fevers under control, especially in children
Reduce the risk of head injury by wearing helmets during risky activities; this can help lessen the chance of developing epilepsy.
Persons with uncontrolled seizures should not drive. Each state has a different law that determines which people with a history of seizures are allowed to drive. If you have uncontrolled seizures, you should also avoid activities where loss of awareness would cause great danger, such as climbing to high places, biking, and swimming alone.
by Dr.Uday D.Nair