What is dengue fever?

Dengue fever is a disease caused by a family of viruses that are transmitted by mosquitoes. It is an acute illness of sudden onset that usually follows a benign course with symptoms such as headache, fever, exhaustion, severe muscle and joint pain, swollen glands (lymphadenopathy), and rash. The presence (the "dengue triad") of fever, rash, and headache (and other pains) is particularly characteristic of dengue. Other signs of dengue fever include bleeding gums, severe pain behind the eyes, and red palms and soles.

Dengue strikes people with low levels of immunity. Because it is caused by one of four serotypes of virus, it is possible to get dengue fever multiple times. However, an attack of dengue produces immunity for a lifetime to that particular serotype to which the patient was exposed.


Dengue hemorrhagic fever is a more severe form of the viral illness. Manifestations include headache, fever, rash, and evidence of hemorrhage in the body. Petechiae (small red or purple blisters under the skin), bleeding in the nose or gums, black stools, or easy bruising are all possible signs of hemorrhage. This form of dengue fever can be life-threatening and can progress to the most severe form of the illness, dengue shock syndrome. 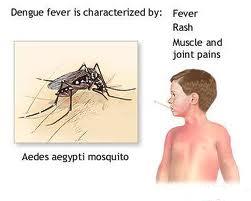 How is dengue fever contracted? 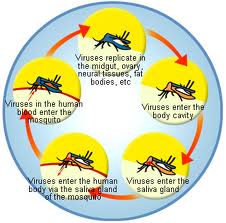 The virus is contracted from the bite of a striped Aedes aegypti mosquito that has previously bitten an infected person. The mosquito flourishes during rainy seasons but can breed in water-filled flower pots, plastic bags, and cans year-round. One mosquito bite can inflict the disease.
The virus is not contagious and cannot be spread directly from person to person. There must be a person-to-mosquito-to-another-person pathway 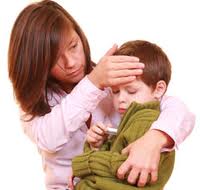 Dengue fever begins with a sudden high fever, often as high as 104 - 105 degrees Fahrenheit.
A flat, red rash may appear over most of the body 2 - 5 days after the fever starts. A second rash, which looks like the measles, appears later in the disease. Infected people may have increased skin sensitivity and are very uncomfortable. 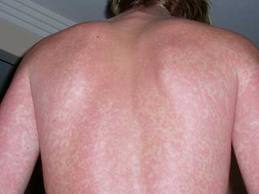 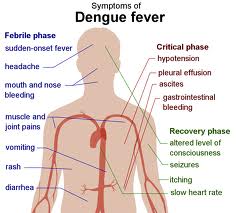 Tests that may be done to diagnose this condition include:


What is the treatment for dengue fever?

Because dengue fever is caused by a virus, there is no specific medicine or antibiotic to treat it. For typical dengue, the treatment is purely concerned with relief of the symptoms (symptomatic). Rest and fluid intake for adequate hydration is important. Aspirin and nonsteroidal anti-inflammatory drugs should only be taken under a doctor's supervision because of the possibility of worsening hemorrhagic complications. Acetaminophen (Tylenol) and codeine may be given for severe headache and for the joint and muscle pain (myalgia).

What is the prognosis for typical dengue fever?

Typical dengue is fatal in less than 1% of cases. The acute phase of the illness with fever and myalgias lasts about one to two weeks. Convalescence is accompanied by a feeling of weakness (asthenia), and full recovery often takes several weeks.

What is dengue hemorrhagic fever?

Dengue hemorrhagic fever (DHF) is a specific syndrome that tends to affect children under 10 years of age. It causes abdominal pain, hemorrhage (bleeding), and circulatory collapse (shock). DHF is also called Philippine, Thai, or Southeast Asian hemorrhagic fever and dengue shock syndrome.
DHF starts abruptly with high continuous fever and headache. There are respiratory and intestinal symptoms with sore throat, cough, nausea, vomiting, and abdominal pain. Shock occurs two to six days after the start of symptoms with sudden collapse, cool, clammy extremities (the trunk is often warm), weak pulse, and blueness around the mouth (circumoral cyanosis).
In DHF, there is bleeding with easy bruising, blood spots in the skin (petechiae), spitting up blood (hematemesis), blood in the stool (melena), bleeding gums, and nosebleeds (epistaxis). Pneumonia is common, and inflammation of the heart (myocarditis) may be present.
Patients with DHF must be monitored closely for the first few days since shock may occur or recur precipitously (dengue shock syndrome). Cyanotic (bluish) patients are given oxygen. Vascular collapse (shock) requires immediate fluid replacement. Blood transfusions may be needed to control bleeding.
The mortality (death) rate with DHF is significant. It ranges from 6%-30%. Most deaths occur in children. Infants under a year of age are especially at risk of dying from DHF.

How can dengue fever be prevented? 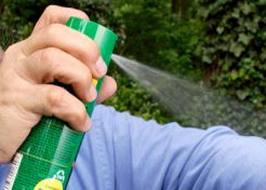 The transmission of the virus to mosquitoes must be interrupted to prevent the illness. To this end, patients are kept under mosquito netting until the second bout of fever is over and they are no longer contagious.

The prevention of dengue requires control or eradication of the mosquitoes carrying the virus that causes dengue. In nations plagued by dengue fever, people are urged to empty stagnant water from old tires, trash cans, and flower pots. Governmental initiatives to decrease mosquitoes also help to keep the disease in check but have been poorly effective.

Limiting exposure to mosquitoes by avoiding standing water and staying indoors two hours after sunrise and before sunset will help.

The Aedes aegypti mosquito is a daytime biter with peak periods of biting around sunrise and sunset. It may bite at any time of the day and is often hidden inside homes or other dwellings, especially in urban areas.

There is currently no vaccine available for dengue fever. 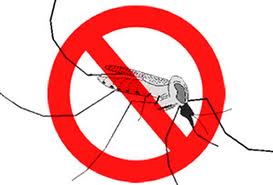 Dengue Fever At A Glance 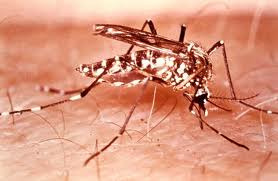 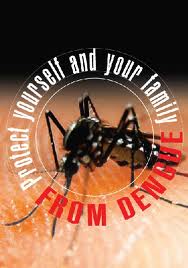