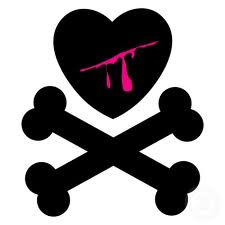 What is internal bleeding? 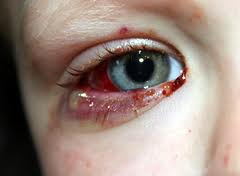 Patients who take anti-clotting medication such as warfarin (Coumadin), clopidogrel (Plavix), heparin, or aspirin are more prone to bleeding than people who do not take these medications. These individuals may experience significant bleeding even with relatively minor injury or illness, and the risk of bleeding needs to be balanced against the benefits of taking the medication.

Some people have genetic or inborn errors of the blood clotting system. Minor injuries may cause major bleeding in these cases. Hemophilia and von Willebrand disease are two examples.

What are the Causes of internal bleeding

Bleeding is common in many types of cancer. Sometimes the bleeding is obvious, but more often, cancer-related bleeding is internal, with perhaps some external manifestations. For example, blood in the stool can indicate cancer of the colon or rectum, while vaginal bleeding could suggest cancer of the cervix, uterus, or ovary. Blood in the urine may signify kidney or bladder cancer. One sign of stomach cancer is vomiting blood; esophageal cancer can also produce vomiting or spitting up blood.


In this disease, which is most commonly caused by alcohol abuse, scar tissue forms in the liver and obstructs the flow of blood. In the advanced stages of cirrhosis, there may be heavy bleeding into the esophagus.


Colon polyps are small, grape-like growths that form clusters inside the large intestine. Some are hereditary (familial polyposis) and have a high probability for becoming cancerous. More often, they are harmless; both types, however, are a common cause of hidden intestinal bleeding.


In diverticulosis, small out­pouches form along weakened segments of the colon wall. Sometimes these pouch­es become impacted with fecal material, causing inflammation. In severe cases, one or more of these outpouches may rupture, causing bleeding and spilling the colon contents into the abdominal cavity. This can lead to life-threatening peritonitis.


Gastrointestinal bleeding may be caused by a variety of disorders, as well as by certain medications. Aspirin, for example, can be the culprit if taken often and in high doses. Gastrointestinal bleeding ranges from mild to severe, and in conditions such as a peptic ulcer, it can cause massive hemorrhage and death if treatment is delayed. If massive bleeding occurs, other symptoms may include pain, heavy perspiration, vomiting blood, bloody stools, and shock.


This is an inborn defect of blood coagulation. It affects only males, although women carry the causative gene. Children who have it often bleed into the joints, resulting in joint pain, swelling and deformity. Even a trivial injury can result in severe internal and external bleeding.


Some forms of leukemia can cause internal bleeding. Other symptoms may include high fever, joint pain, fatigue, pallor, and abnormal blood counts.


This inherited disorder can cause weakness of the aorta, the largest artery that carries blood from the heart for distribution to all parts of the body. Severe, internal bleeding can occur if an aneurysm develops and ruptures.


Severe vaginal bleeding may occur during a miscarriage. It also may be a sign of approaching menopause or failure to ovulate. Vaginal bleeding that is unrelated to pregnancy or menstruation is a common sign of cancer.


These are disorders of the blood vessels in which inter­nal bleeding is a likely symptom. Purpura, in which blood vessels are fragile and the person bruises easily, is one of the most common of these disorders. There may also be fever and joint pain 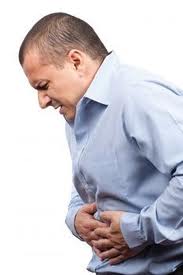 Symptoms accompanying internal bleeding vary based on the location and speed of blood loss. Pain may or may not be present. Rapid bleeding can quickly cause weakness, dizziness, shock and unconsciousness. Slower bleeding may ultimately cause anemia, with the gradual onset of tiredness, weakness, shortness of breath, and pallor. Bleeding into the gastrointestinal or urinary tract can cause blood in the stool, vomit or urine. 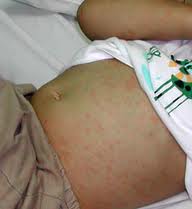 Common symptoms that may occur with internal bleeding in the head

Internal bleeding in the head may accompany other symptoms including:

Internal bleeding in the chest or abdomen may accompany other symptoms including: 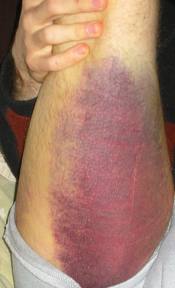 Internal bleeding into the muscles or joints may accompany other symptoms including:

Other symptoms that may occur along with internal bleeding

Internal bleeding at other sites may accompany other symptoms including:

In some cases, internal bleeding may be a symptom of a life-threatening condition that should be immediately evaluated in an emergency setting. Seek immediate medical care if you, or someone you are with, have any of these life-threatening symptoms including:

How is internal bleeding diagnosed?

The diagnosis for internal bleeding begins with the doctor taking a history and performing a physical examination on the patient. The situation and the source of the bleeding will focus the testing strategy on the part of the body that may be involved with the bleeding. Sometimes the direction of diagnosis is self evident; a motor vehicle crash victim who complains of abdominal pain will have attention directed to the abdomen. Sometimes it is less evident. A confused patient may have issues with bleeding in the brain, or may be so anemic (decreased red blood cell count) from blood loss elsewhere, that the brain is not getting enough oxygen and nutrients to function properly.

Blood tests may include a complete blood count (CBC) or hemogram to access for anemia and abnormal platelet count. INR (international normalized ratio) and PTT (partial thromboplastin time, a blood test that measures how long it takes for blood to clot) are blood clotting studies that may be measured to screen for abnormal clotting function. Depending upon the situation, the hospital blood banking system may be alerted to begin the process of crossmatching blood products for potential transfusion.

Diagnostic tests such as X-rays, Doppler ultrasound, and CT scan may be used depending upon the underlying medical problem associated with internal bleeding. 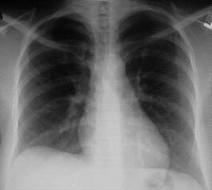 Computerized tomography (CT scan) is the primary tool used in emergency situations to access for bleeding or swelling in the brain. In a small fraction of patients who have bleeding from a ruptured cerebral aneurysm (a blood vessel that leaks in the brain), the CT will initially be normal and a lumbar puncture may be performed to help make the diagnosis.

CT scan is also one of the tests that can be performed to access for bleeding within the abdomen and chest. It is especially helpful in trauma to look for bleeding from the solid organs of the abdomen like the liver, spleen, and kidney. It is ideal for evaluating the retroperitoneal space for bleeding and can also evaluate fractures of the pelvis and spine.

In cases of potential bleeding from a major blood vessel, CT angiography may be considered to look for a specific blood vessel that is bleeding.

Ultrasound may be used to look for sources of bleeding, most often where there is an obstetric or gynecologic source of bleeding.

Endoscopy, colonoscopy, and anoscopy are used to look for sources of bleeding in the gastrointestinal tract. Using a flexible scope with an attached camera, a gastroenterologist may look into the stomach and intestine, rectum, and colon to find the source of bleeding. Using the same instrument, cautery (electricity used to coagulate or burn a blood vessel) can stop the bleeding if the source is found

How is internal bleeding treated?

The initial treatment plan of any patient with internal bleeding begins with assessing the patient's stability and making certain the ABCs are well maintained. This includes making certain the patient's:
The definitive treatment of internal bleeding depends upon where the bleeding is occuring, the individual situation, and the stability of the patient. The basic goals include identifying and stopping the source of bleeding and repairing any damage that the bleeding may have caused.

What are the complications of internal bleeding?

Depending upon where it occurs, if not recognized, internal bleeding may cause organ failure, shock, and death. For example:

How can we prevent or take precautions?

Internal bleeding covers many organ systems and situations. Disease and injury prevention is the basis of maintaining a healthy lifestyle.

Preventing alcohol-related diseases can help prevent a significant cause of internal bleeding.

Individuals taking medication that predispose them to internal (and external) bleeding should take extra precautions to avoid any trauma; moreover, they should continue to get routine blood tests (INR, PT, CBC's) to see if they are appropriately medicated and assure they are not bleeding internally

Internal Bleeding At A Glance 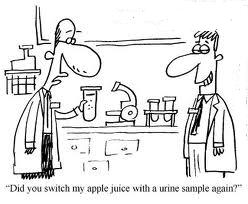