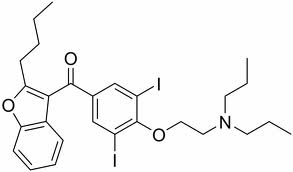 Amiodarone is an iodine-containing compound with some structural similarity to thyroxine. The drug's high iodine content likely is a factor in its effects on the thyroid gland. The bioavailability of amiodarone is variable but generally poor, ranging from 22 to 95 percent.Absorption is enhanced when the drug is taken with food.Amiodarone is highly lipid soluble and is stored in high concentrations in fat and muscle, as well as in the liver, lungs, and skin. Amiodarone crosses the placenta and reaches measurable levels in breast milk.
The major metabolite of amiodarone is desethylamiodarone (DEA), which is known to have antiarrhythmic properties. Grapefruit juice can inhibit amiodarone metabolism and lead to elevated drug levels, but the impact of this interaction on the long-term efficacy and toxicity of amiodarone is not known.
The elimination half-life of amiodarone is highly variable and unusually long, averaging about 58 days. The long half-life is thought to be a result of the drug's slow release from lipid-rich tissues.
ELECTROPHYSIOLOGIC EFFECTS 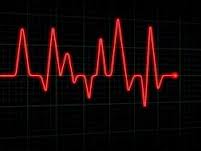 Amiodarone is considered to be a class III drug (Vaughan Williams classification), which indicates that it prolongs the QT interval. However, the drug has many other effects: it slows heart rate and atrioventricular nodal conduction (via calcium channel and beta-receptor blockade), prolongs refractoriness (via potassium and sodium channel blockade), and slows intracardiac conduction (via sodium channel blockade).
The relationship between plasma amiodarone concentrations and effect, as well as the contribution of the metabolite DEA, is not well established.Routine monitoring of the amiodarone plasma level is not recommended. [Evidence level C, consensus/expert guidelines] 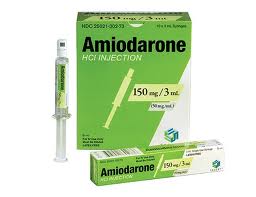 Amiodarone has several characteristics that make it unique.

First, the drug takes weeks to achieve its maximum effectiveness. This is because amiodarone is stored in most of the tissues of the body, and to "load" the body with the drug, all the tissues need to be saturated. The typical "loading" regimen of amiodarone, therefore, is to use very large doses for a week or two, then taper the dosage over the next month or so. It is not unusual to give patients 1200 or 1600 mg per day at first, and then maintain them on as little as 100 or 200 mg per day chronically.
Second, amiodarone leaves the body very, very slowly. It is not excreted (like most drugs) by the liver or the kidneys. It is lost when amiodarone-containing human cells are lost - such as skin cells or cells from the GI tract, which are shed by the millions each day. Thus, if it is decided that one needs to stop amiodarone, the drug remains in the body in measurable quantities for months and months. The "half life" of the drug, in contrast to most other drugs, is measured in weeks instead of hours.
Third, because amiodarone is stored in many different kinds of tissues, it can produce side effects affecting many different organs. Some of these side effects take months or years to develop, so it is never true that one can stop being vigilant.
Fourth, amiodarone works through many different mechanisms, unlike most drugs. It fits into two separate categories of antiarrhythmic drugs (Class I and Class III). It acts as a beta blocker and also as a calcium blocker. It dilates blood vessels, and and it often acts to "block" the effect of thyroid horomone.


Because of its life-threatening side effects and the substantial management difficulties associated with its use, Cordarone is indicated only for the treatment of the following documented, life-threatening recurrent ventricular arrhythmias when these have not responded to documented adequate doses of other available antiarrhythmics or when alternative agents could not be tolerated.
As is the case for other antiarrhythmic agents, there is no evidence from controlled trials that the use of Cordarone Tablets favorably affects survival.
Cordarone should be used only by physicians familiar with and with access to (directly or through referral) the use of all available modalities for treating recurrent life-threatening ventricular arrhythmias, and who have access to appropriate monitoring facilities, including in-hospital and ambulatory continuous electrocardiographic monitoring and electrophysiologic techniques. Because of the life-threatening nature of the arrhythmias treated, potential interactions with prior therapy, and potential exacerbation of the arrhythmia, initiation of therapy with Cordarone should be carried out in the hospital.
Dosage :

Oral:Ventricular arrhythmias- Adult: 800-1,600 mg/day in 1-2 divided doses for 1-3 week until initial therapeutic response is achieved then reduce dose to 600-800 mg/day in 1-2 divided doses for 1 month. Maintenance: 400 mg/day; lower doses may be used for supraventricular arrhythmias. Close monitoring of the patient is recommended. Use the minimum effective dose. Liver impairment: Dosage reduction may be necessary.
IV Recommended starting dose is approximately 1,000 mg over the first 24 h administered as follows: rapid administration of 150 mg over first 10 min (15 mg/min), followed by 360 mg over next 6 h (1mg/min), then 540 mg over remaining 18 h (0.5 mg/min). After first 24 h, continue maintenance infusion rate of 0.5 mg/min (720 mg/24 h).

There are a number of important drug interactions with amiodarone. This agent appears to have a marked effect on the kinetics of some commonly used cardiovascular drugs, such as warfarin, digoxin, quinidine, and procainamide, and has dynamic interactions with others, such as the beta blockers and some calcium antagonists. Bleeding has been reported, apparently caused by a potentiation of the anticoagulant effect of warfarin by amiodarone. Torsades de pointes has been observed when quinidine, propafenone, or mexiletine is given together with amiodarone. Furthermore, amiodarone may interact with beta-blocking agents and some of the calcium antagonists to produce symptomatic sinus bradycardia and sinus arrest, especially in a latent or overt sick sinus syndrome. During surgery, amiodarone may induce hypotension and an atropine-resistant bradycardia, possibly by interacting with anesthetic agents. A knowledge of the time of onset, extent, duration, and possible mechanisms of the interactions of amiodarone with other cardioactive drugs is still incomplete, but further studies are of great therapeutic importance.

Though this medication often gives great benefits to people with irregular heartbeat, it may infrequently worsen an irregular heartbeat or cause serious (sometimes fatal) side effects. When starting treatment with this drug, your doctor may have you stay in the hospital for proper monitoring.
Amiodarone may take 2 weeks or longer to have an effect in your body. Also, this drug stays in your body for weeks to months, even after you are no longer taking it. Therefore, serious side effects may occur weeks to months after taking amiodarone. Serious side effects may include lung or liver problems. Tell your doctor immediately if you notice any symptoms of lung or liver problems such as cough, shortness of breath, chest pain, coughing up blood, persistent nausea/vomiting, dark urine, severe stomach/abdominal pain, or yellowing eyes/skin. 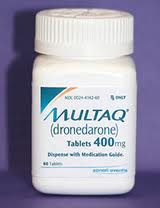 Dronedarone,marketed as Multaq is a drug by Sanofi-Aventis, mainly for the indication of cardiac arrhythmias. It was recommended as an alternative to amiodarone for the treatment of atrial fibrillation and atrial flutter in people whose hearts have either returned to normal rhythm or who undergo drug therapy or electric shock treatment i.e. direct current cardioversion ( DCCV ) to maintain normal rhythm.
In dronedarone, the iodine moieties are not present, reducing toxic effects on the thyroid and other organs. A methylsulfonamide group is added to reduce solubility in fats (lipophilicity) and thus reduce neurotoxic effects

Dronedarone is less lipophilic than amiodarone, has a much smaller volume of distribution, and has an elimination half-life of 24 hours—this stands in contrast to amiodarone's half-life of several weeks.As a result of these pharmacokinetic characteristics, dronedarone dosing may be less complicated than amiodarone.

Dronedarone has been termed a “multichannel blocker” however it is unclear which channel(s) play a pivotal role in its success. Thus, dronedarone's actions at the cellular level are controversial with most studies suggesting an inhibition in multiple inward potassium currents including rapid delayed rectifier, slow delayed rectifier and ACh-activated inward rectifier. It is also believed to reduce inward rapid Na current and L-type Ca channels. The reduction in K current in some studies was shown to be due to the inhibition of K-ACh channel or associated GTP-binding proteins.Reduction of K+ current by 69% led to increased AP duration and increased effective refractory periods, thus shown to suppress pacemaker potential of the SA node and return patients to a normal heart rhythm.

To reduce the risk of cardiovascular hospitalization in patients with paroxysmal or persistent atrial fibrillation (AF) or atrial flutter (AFL), with a recent episode of AF/AFL and associated cardiovascular risk factors (i.e., age greater than 70 years, hypertension, diabetes, prior cerebrovascular accident, left atrial diameter 50 mm or more, or left ventricular ejection fraction [LVEF] less than 40%), who are in sinus rhythm or who will be cardioverted:

400 mg orally twice a day with morning and evening meals

To reduce the risk of cardiovascular hospitalization in patients with paroxysmal or persistent atrial fibrillation (AF) or atrial flutter (AFL), with a recent episode of AF/AFL and associated cardiovascular risk factors (i.e., age greater than 70 years, hypertension, diabetes, prior cerebrovascular accident, left atrial diameter 50 mm or more, or left ventricular ejection fraction [LVEF] less than 40%), who are in sinus rhythm or who will be cardioverted:

400 mg orally twice a day with morning and evening meals

Amiodarone has greater efficacy than dronedarone for the maintenance of sinus rhythm in patients with atrial fibrillation (AF), whereas dronedarone has a better safety profile that could result in fewer treatment discontinuations and even in reduced mortality. 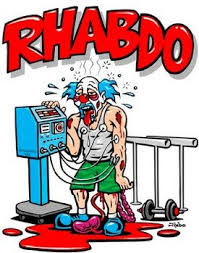