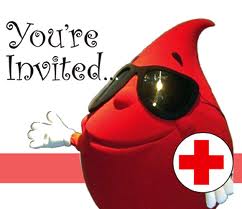 An adult human has about 4–6 liters of blood circulating in the body. Among other things, blood transports oxygen to various parts of the body.
Blood consists of several types of cells floating around in a fluid called plasma.

The platelets help the blood to clot, if you get a wound for example.

The plasma contains salts and various kinds of proteins

The differences in human blood are due to the presence or absence of certain protein molecules called antigens and antibodies. The antigens are located on the surface of the red blood cells and the antibodies are in the blood plasma. Individuals have different types and combinations of these molecules. The blood group you belong to depends on what you have inherited from your parents.
There are more than 20 genetically determined blood group systems known today, but the AB0 and Rh systems are the most important ones used for blood transfusions. Not all blood groups are compatible with each other. Mixing incompatible blood groups leads to blood clumping or agglutination, which is dangerous for individuals. 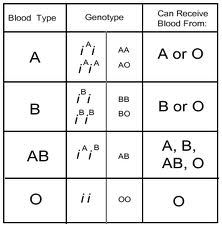 Blood transfusion is the process of transferring blood or blood-based products from one person into the circulatory system of another. Blood transfusions can be life-saving in some situations, such as massive blood loss due to trauma, or can be used to replace blood lost during surgery. Blood transfusions may also be used to treat a severe anaemia or thrombocytopenia caused by a blood disease. People suffering from hemophilia or sickle-cell disease may require frequent blood transfusions. Early transfusions used whole blood, but modern medical practice commonly uses only components of the blood 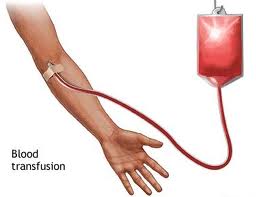 Blood transfusions can be grouped into two main types depending on their source:
Donor units of blood must be kept refrigerated to prevent bacterial growth and to slow cellular metabolism. The transfusion must begin within 30 minutes after the unit has been taken out of controlled storage.
Blood can only be administered intravenously. It therefore requires the insertion of a cannula of suitable caliber.
Before the blood is administered, the personal details of the patient are matched with the blood to be transfused, to minimize risk of transfusion reactions. Clerical error is a significant source of transfusion reactions and attempts have been made to build redundancy into the matching process that takes place at the bedside.
A unit (up to 500 ml) is typically administered over 4 hours. In patients at risk of congestive heart failure, many doctors administer a diuretic to prevent fluid overload, a condition called Transfusion Associated Circulatory Overload or TACO. Acetaminophen and/or an antihistamine such as diphenhydramine are sometimes given before the transfusion to prevent other types of transfusion reactions

Blood is most commonly donated as whole blood by inserting a catheter into a vein and collecting it in a plastic bag (mixed with anticoagulant) via gravity. Collected blood is then separated into components to make the best use of it. Aside from red blood cells, plasma, and platelets, the resulting blood component products also include albumin protein, clotting factor concentrates, cryoprecipitate, fibrinogen concentrate, and immunoglobulins (antibodies). Red cells, plasma and platelets can also be donated individually via a more complex process called apheresis.
Blood donations are usually anonymous to the recipient, but products in a blood bank are always individually traceable through the whole cycle of donation, testing, separation into components, storage, and administration to the recipient. This enables management and investigation of any suspected transfusion related disease transmission or transfusion reaction. In developing countries the donor is sometimes specifically recruited by or for the recipient, typically a family member, and the donation occurs immediately before the transfusion.

For donors, the process of giving blood is very safe. Only sterile equipment is used and there is no chance of catching an infection from the equipment. There is a slight chance of infection at the puncture site if the skin is not properly washed before the collection needle is inserted. Some donors feel light-headed upon standing for the first time after donating. Occasionally, a donor will faint. Donors are advised to drink lots of liquids to replace the fluid lost with the donated blood. It is important to maintain the fluid volume of the blood so that the blood pressure will remain stable. Strenuous exercise should be avoided for the rest of the day. Most patients have very slight symptoms or no symptoms at all after donating blood.
For recipients, a number of precautions must be taken. The blood given by transfusion must be matched with the recipient's blood type. Incompatible blood types can cause a serious adverse reaction (transfusion reaction). Blood is introduced slowly by gravity flow directly into the veins (intravenous infusion) so that medical personnel can observe the patient for signs of adverse reactions. People who have received many transfusions can develop an immune response to some factors in foreign blood cells. This immune reaction must be checked before giving new blood. Infectious diseases can also be transmitted through donated blood


The key importance of the Rh group is its role in Hemolytic disease of the fetus and newborn. When an Rh negative mother carries a positive fetus, she can become immunized against the Rh antigen. This usually is not important during that pregnancy, but in the following pregnancies she can develop an immune response to the Rh antigen. The mother's immune system can attack the baby's red cells through the placenta. Mild cases of HDFN can lead to disability but some severe cases are fatal. Rh-D is the most commonly involved red cell antigen in HDFN, but other red cell antigens can also cause the condition. The "positive" or "negative" in spoken


A number of infectious diseases such as HIV, syphilis, hepatitis B and hepatitis C, among others can be passed from the donor to recipient.
Among the diseases that can be transmitted via transfusion are:
When a person's need for a transfusion can be anticipated, as in the case of scheduled surgery, autologous donation can be used to protect against disease transmission and eliminate the problem of blood type compatibility. "Directed" donations from donors known to the recipient were a common practice during the initial years of HIV. These kinds of donations are still common in developing countries.


Donated blood is usually subjected to processing after it is collected, to make it suitable for use in specific patient populations. Examples include:

To ensure the safety of blood transfusion to pediatric patients, hospitals are taking additional precaution to avoid infection and prefer to use specially tested pediatric blood units that are guaranteed negative for Cytomegalovirus. Most guidelines recommend the provision of CMV-negative blood components and not simply leukoreduced components for newborns or low birthweight infants in whom the immune system is not fully developed. These specific requirements place additional restrictions on blood donors who can donate for neonatal use.
Neonatal transfusions typically fall into one of two categories:

The terms type and screen are used for the testing that 1 determines the blood group ABO compatibility and 2 screens for alloantibodies. It takes about 45 minutes to complete depending on the method used. The blood bank technologist also checks for special requirements of the patient e.g. need for washed, irradiated or CMV negative blood and the history of the patient to see if they have a previously identified antibody.
A positive screen warrants an antibody panel/investigation. An antibody panel consists of commercially prepared group O red cell suspensions from donors that have been phenotyped for commonly encountered and clinically significant alloantibodies. Donor cells may have homozygous e.g. K+k-, heterozygous K+k+ expression or no expression of various antigens K-k+. The phenotypes of all the donor cells being tested are shown in a chart. The patient's serum is tested against the various donor cells using an enhancement method, e.g. Gel or LISS. Based on the reactions of the patient's serum against the donor cells, a pattern will emerge to confirm the presence of one or more antibodies. Not all antibodies are clinically significant i.e. cause transfusion reactions, HDN, etc.. Once the patient has developed a clinically significant antibody it is vital that the patient receive antigen negative phenotyped red blood cells to prevent future transfusion reactions. A direct antiglobulin test DAT is also performed as part of the antibody investigation.
Once the type and screen has been completed, potential donor units will be selected based on compatibility with the patient's blood group, special requirements e.g. CMV negative, irradiated or washed and antigen negative in the case of an antibody. If there is no antibody present or suspected, the immediate spin or CAC computer assisted crossmatch method may be used.
In the immediate spin method, two drops of patient serum are tested against a drop of 3-5% suspension of donor cells in a test tube and spun in a serofuge. Agglutination or hemolysis in the test tube is a positive reaction and the unit should not be transfused.
If an antibody is suspected, potential donor units must first be screened for the corresponding antigen by phenotyping them. Antigen negative units are then tested against the patient plasma using an antiglobulin/indirect crossmatch technique at 37 degrees Celsius to enhance reactivity and make the test easier to read.
If there is no time the blood is called "uncross-matched blood". Uncross-matched blood is O-positive or O-negative. O-negative is usually used for children and women of childbearing age. It is preferable for the laboratory to obtain a pre-transfusion sample in these cases so a type and screen can be performed to determine the actual blood group of the patient and to check for alloantibodies.

PLEASE NOTE-IT IS ADVISABLE TO GET BLOOD TYPE COMPATIBILITY BEFORE MARRIAGE;

When a person having Rh –ve blood group marries some body with +ve blood group, then there are chances that their 2nd child to be born with deformities. Hence, even medically speaking knowing each other blood group thus makes a lot of practical sense. Knowing the medical reports may help in overcoming most of the common obstacles of thalassemia.


COCHIN CARDIAC CLUB ENDS WITH A MESSAGE TO ALL: 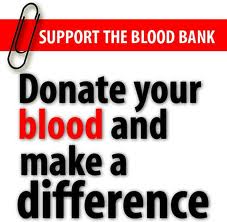 Inspiring quest there. What occurred after?
Good luck!

Here is my page; Cheap Stromectol Online No Prescription