Warfarin (Coumadin) is an anticoagulant medication that is used to prevent thrombosis (clots) and embolism in many disorders.
Warfarin is a synthetic derivative of coumarin, a chemical found naturally in many plants -- it decreases blood coagulation by interfering with vitamin K metabolism.

Warfarin inhibits the effective synthesis of biologically active forms of the vitamin K-dependent clotting factors: II, VII, IX and X, as well as the regulatory factors protein C, protein S and protein Z. Other proteins not involved in blood clotting, such as osteocalcin, may also be affected.
The precursors of these factors require carboxylation of their glutamic acid residues to allow the coagulation factors to bind to phospholipid surfaces. This carboxylation is linked to oxidation of vitamin K to form vitamin K epoxide, which is in turn recycled back to the reduced form by the enzyme vitamin K epoxide reductase (VKOR). Warfarin inhibits epoxide reductase (specifically the VKORC1 subunit), thereby diminishing available vitamin K stores and inhibiting production of functioning coagulation factors. As the body stores of previously-produced factors degrade (over several days), the anticoagulation effect becomes apparent. The coagulation factors are produced, but have decreased functionality due to undercarboxylation; they are collectively referred to as PIVKAs (proteins induced [by] vitamin K absence/antagonism

Warfarin is prescribed to people with an increased tendency for thrombosis or as prophylaxis in those individuals who have already formed a blood clot (thrombus) which required treatment. This can help prevent formation of future blood clots and help reduce the risk of embolism (migration of a thrombus to a spot where it blocks blood supply to a vital organ). Common clinical indications for warfarin use are atrial fibrillation, artificial heart valves, deep venous thrombosis and pulmonary embolism.
Dosing of warfarin is complicated by the fact that it is known to interact with many commonly used medications and other chemicals that may be present in appreciable quantities in food. These interactions may enhance or reduce warfarin's anticoagulation effect. Many commonly used antibiotics, such as metronidazole or the macrolides, will greatly increase the effect of warfarin by reducing the metabolism of warfarin in the body. Other broad-spectrum antibiotics can reduce the amount of the normal bacterial flora in the bowel, which make significant quantities of Vitamin K, thus potentiating the effect of warfarin. In addition, food that contains large quantities of Vitamin K will reduce the warfarin effect; and medical conditions such as hypo- or hyperthyroidism will alter the rate of breakdown of the clotting factors.
Therefore, in order to optimise the therapeutic effect without risking dangerous side effects, such as bleeding, close monitoring of the degree of anticoagulation is required by blood testing (INR) . Initially, checking may be as often as twice a week; the intervals can be lengthened if the patient manages stable therapeutic INR levels on an unchanged warfarin dose.
When initiating warfarin therapy ("warfarinisation"), the doctor will decide how strong the anticoagulant therapy needs to be. The target INR level will vary from case to case dependent upon the clinical indicators, but tends to be 2-3 in most conditions

The only common side-effect of warfarin is hemorrhage (bleeding). The risk of severe bleeding is small but definite (1-2% annually) and any benefit needs to outweigh this risk when warfarin is considered as a therapeutic measure. Risk of bleeding is augmented if the INR is out of range (due to accidental or deliberate overdose or due to interactions), and may cause hemoptysis (coughing up blood), excessive bruising, bleeding from nose or gums, or blood in urine or stool.
A feared (but rare) complication of warfarin is warfarin necrosis, which occurs more frequently shortly after commencing treatment in patients with a deficiency of protein C. Protein C is an innate anticoagulant that, like the procoagulant factors that warfarin inhibits, requires vitamin K-dependent carboxylation for its activity. Since warfarin initially decreases protein C levels faster than the coagulation factors, it can paradoxically increase the blood's tendency to coagulate when treatment is first begun (many patients when starting on warfarin are given heparin in parallel to combat this), leading to massive thrombosis with skin necrosis and gangrene of limbs. Its natural counterpart, purpura fulminans, occurs in children who are homozygous for protein C mutations.
Another rare complication that may occur early during warfarin treatment (usually within 3 to 8 weeks) is purple toe syndrome. This condition is thought to result from small deposits of cholesterol breaking loose and flowing into the blood vessels in the skin of the feet, which causes a blueish purple color and may be painful. It is typically thought to affect the big toe, but it affects other parts of the feet as well, including the bottom of the foot (plantar surface). The occurrence of purple toe syndrome may require discontinuation of warfarin

The PT/INR is a test to determine the clotting tendency (coagulation) of blood and is most commonly used in monitoring the accuracy of blood thinning products such as warfarin. A person taking the anticoagulant warfarin (Coumadin ®) must be tested regularly to ensure their INR stays within a specific INR range - often referred to as a “target range”. A person is considered out of range when their INR result is higher or lower than what their physician establishes as their target range
The INR is an acronym. INR stands for: International Normalized Ratio. This is a professional term for a blood test to determine how much active warfarin (Coumadin ®) is in a patient at the time of the blood test.

A blood test for patients on Coumadin® (warfarin) has several different names including:
All of these names have the same meaning for patients. Some clinics simplify it by referring to it as “test results”. Doctors, nurses and pharmacists use the term INR as this is the accepted terminology for a blood test result for someone taking warfarin. The INR test is used the same for patients taking the brand Coumadin® as well as for patients taking the generic form of warfarin. An INR test result is reported as a number. For example, a patient not taking warfarin may produce an INR result of 1.0. A patient taking warfarin may result in an INR result between 2.0 and 3.0.
The INR is used to standardize the blood test providing the same result regardless of where the patient has their blood sample taken. 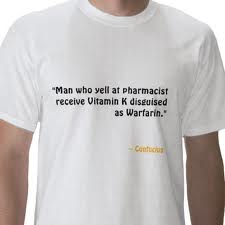