Partial or complete loss of consciousness with interruption of awareness of oneself and ones surroundings. When the loss of consciousness is temporary and there is spontaneous recovery, it is referred to as syncope or, in nonmedical quarters, fainting. Syncope accounts for one in every 30 visits to a casualty
.
Syncope is due to a temporary reduction in blood flow and therefore a shortage of oxygen to the brain. This leads to lightheadedness or a "black out" episode, a loss of consciousness. Temporary impairment of the blood supply to the brain can be caused by heart conditions and by conditions that do not directly involve the heart: 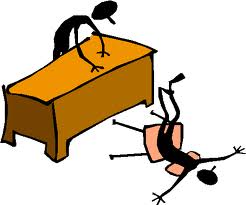 Decreased blood flow to the brain can occur because

1) the heart fails to pump the blood;
2) the blood vessels don't have enough tone to maintain blood pressure to deliver the blood to the brain;
3) there is not enough blood or fluid within the blood vessels;
4) a combination of reasons one, two, or three above.
5)low blood sugar (often from diabetes),
6)seizures and panic attacks.
7)Severe blood loss can also cause fainting.

The cardiac causes of syncope can be fatal. There are two major varieties of cardiac syncope: obstructive cardiac lesions, and cardiac arrhythmias.

Obstructive cardiac lesions: Several heart disorders can result in an obstruction of blood flow through the heart. These include obstructed heart valves (aortic stenosis and mitral stenosis are the most common examples; obstructed blood vessels (such as a massive pulmonary embolus; and cardiac tumors (such as an atrial myxoma, a benign tumor that can obstruct the mitral valve). Most of these lesions are readily apparent to a physician taking a careful medical history and doing a careful cardiac examination. And for the most part, they are readily confirmed by performing a simple echocardiogram.

Bradycardias, or slow heart rhythms, are treated effectively by inserting a cardiac pacemaker. 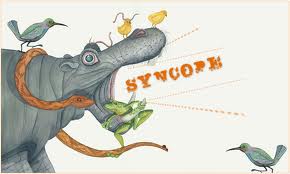 Tests may include blood tests, electrocardiogram (ECG), and imaging of the brain, such as magnetic resonance imaging (MRI). Your doctor will focus on medications you take, preexisting medical conditions, and your description of any similar episodes you may have experienced in the past. This will help your doctor pinpoint why you fainted and identify or rule out particular health conditions. If seizures are suspected, your doctor may also perform a test called an electroencephalogram (EEG).

You may be able to avoid fainting, depending on the cause.
If you feel like you are going to faint, lie down and raise your legs (that helps keep blood flowing to your brain). If you can' t lie down, sit down and put your head between your knees. Or stand with your legs crossed and thighs pressed together -- this can also help keep blood from pooling in your legs.

When an irregular heartbeat causes fainting, your doctor may prescribe medications such as beta-blockers or antiarrhythmics
A second form of treatment is ablation. Ablation consists of carefully mapping the electrical system of the heart (either in the electrophysiology laboratory or in the operating room), locating the part of the electrical system that is causing the arrhythmia, and ablating the offending area (by freezing it, burning it, or surgically excising it). Unfortunately, most forms of VT are very difficult to localize to a specific “culprit” area. This means that ablation is only infrequently an option for VT (and never for VF).

If fainting is caused by a heart condition, such as a slow or rapid heartbeat, you may need a pacemaker
.
by Dr.Uday D.Nair