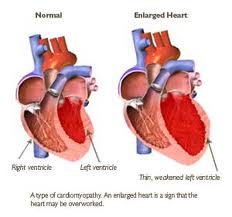 Heart failure is when the heart loses its ability to pump blood efficiently through your body. Oxygen and nutrients in blood provide your body with the energy it needs to operate normally.The chambers of the heart respond by stretching to hold more blood to pump through the body or by becoming more stiff and thickened. This helps to keep the blood moving for a short while, but in time, the heart muscle walls weaken and are unable to pump as strongly. As a result, the kidneys often respond by causing the body to retain fluid (water) and sodium. If fluid builds up in the arms, legs, ankles, feet, lungs or other organs, the body becomes congested, and congestive heart failure is the term used to describe the condition.
Heart failure may affect the left, right or both sides of the heart.
Often left heart failure leads to right heart failure, causing biventricular failure (failure on both sides).
Causes 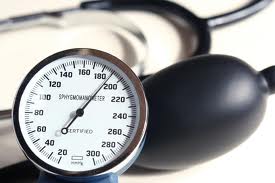 Many things affect the ability of the heart to function well as a pump, but commonly it follows a heart attack. Because some of the heart muscle dies after a heart attack, its power to squeeze out blood is reduced and heart failure develops.
Other common factors that can lead to heart failure are high blood pressure, alcohol and problems with the heart valves.It tends to affect older people, and the average age at diagnosis is 76. It is more common in men than women. 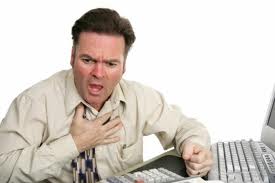 Please Note- Heart failure can be treated, allowing you to control the effects of the condition and continue to live a normal life. 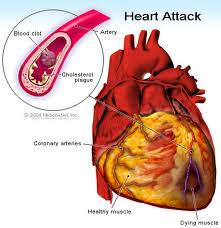 Heart attack treatment works best when it's given right after symptoms occur.
Causes 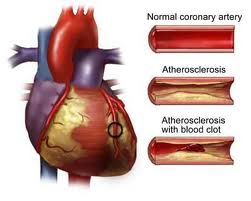 Most commonly, a blood clot from a furred-up artery becomes stuck in one of the heart's blood vessels and blocks it.This is most likely to happen if you are older, male, a smoker, overweight or have high cholesterol or high blood pressure. 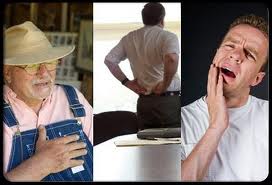 Acting fast at the first sign of heart attack symptoms can save your life and limit damage to your heart. Treatment works best when it's given right after symptoms occur.

The most common heart attack signs and symptoms are:
Please Note-Each year, millions have heart attacks,and many of them die. Coronary Heart Disease,which often results in heart attacks,is the leading killer of both men and women in the world.
Many more people could survive or recover better from heart attacks if they got help faster. Of the people who die from heart attacks, about half die within an hour of the first symptoms and before they reach the hospital.
Do not drive to the hospital or let someone else drive you. Call an ambulance so that medical personnel can begin life-saving treatment on the way to the emergency room. Take a nitroglycerin pill if your doctor has prescribed this type of treatment. 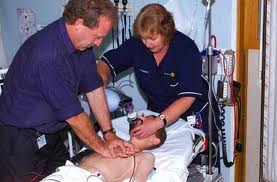 A cardiac arrest, also known as cardiopulmonary arrest or circulatory arrest, is the abrupt cessation of normal circulation of the blood due to failure of the heart to contract effectively during systole.The special electrical impulses cease, so the heart no longer knows to beat. The electrical impulses can sometimes be restarted by defibrillating or 'shocking' the heart.
Causes 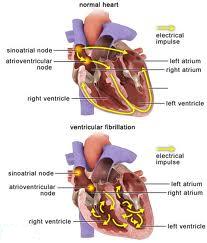 Cardiac arrest directly results from a variety of arrhythmias which include asystole (known colloquially as a flatline), ventricular fibrillation, ventricular tachycardia, severe bradycardia and complete heart block with a slow ventricular escape rate.

These arrhythmias can result from: 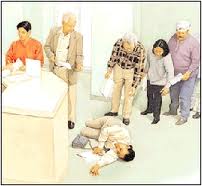 Symptoms can occur suddenly without warning or there may be some symptoms before cardiac arrest. These symptoms vary depending on the specific type and severity of the underlying disease or disorder. Symptoms can include anxiety, palpitations, chest pain, shortness of breath, dizziness, fainting (syncope) and angina. Symptoms can also include hypotension, weak pulse, labored breathing, and cessation of breathing (apnea).
Please Note-When the heart stops,the lack of oxygenated blood can cause brain damage in only a few minutes. Death or permanent brain damage can occur within four to six minutes. Time is critical when you're helping an unconscious person who isn't breathing. Take immediate action:


Portable automated external defibrillators (AEDs) are available in an increasing number of places, including airports and shopping malls. You can also purchase them for your home. AEDs come with built-in instructions for their use. They're programmed to allow a shock only when appropriate. 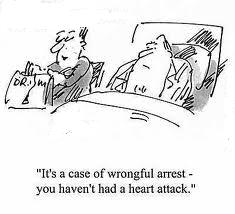