Commotio cordis is a rare arrhythmia that can result from a blunt,non-penetrating impact to the precordial region(typically the apical region),often caused by impact of a ball,a bat,or other projectile. The impact is transmitted to the heart muscle, and depending on the precise timing in relation to the cardiac cycle,it may affect the heart's electrical activity, causing an arrhythmia,such as an ectopic beat,ventricular tachycardia,or ventricular fibrillation.In most reported cases,it ends in sudden death. 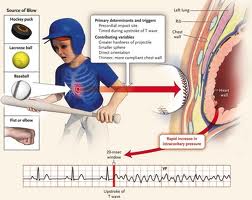 It is believed that although the chest trauma is of insufficient force to cause major injury and is out of proportion to the outcome,the person who is struck collapses immediately in most instances. In the remaining cases, the individual has a transient period of consciousness, during which a brief purposeful activity, movement, or behavior (eg, picking up and throwing a ball, crying) is performed before final collapse.


Survival after a commotio cordis event is still the exception. Although efforts at resuscitation occur frequently, often involving trained bystanders or emergency medical technicians, the onset of cardiopulmonary resuscitation (CPR) is often delayed because observers underestimate the severity of the trauma or believe that the wind has been knocked out of the person. Survival has usually been associated with effective CPR efforts and defibrillation that occur within 1-3 minutes of the collapse. The survival rate was only 3% in cases in which resuscitative efforts were delayed longer than 3 minutes. Although numerous individuals have been resuscitated with the restoration of a perfusing heart rhythm, many of these individuals have experienced irreversible ischemic encephalopathy and ultimately died as a result of the injury.


Early resuscitation and defibrillation are critical.This may occur during sporting events or from child abuse and most patients are boys who are younger than 16 years. 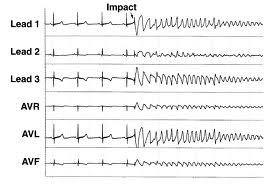 
Commotio cordis' prognosis depends on the availability of cardiac defibrillation. 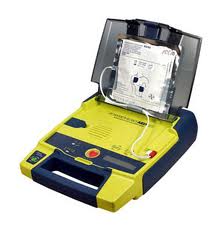 Automatic defibrillators at convenient locations near sporting events, combined with improved cardiopulmonary resuscitation education, may improve chances of survival after this rare phenomenon. Transient cardiac conduction abnormalities and arrhythmias have been observed in survivors; therefore, cardiac clearance before resumption of sports is indicated. 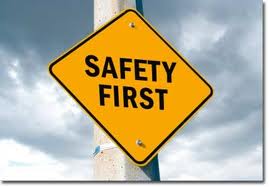 Commotio cordis is scary, but it is very rare. Don't let such an unlikely event keep you from encouraging your kids to be active and competitive. If you see commotio cordis happen, to your child or to anyone else's, act immediately and prevent it from taking even one more young life. 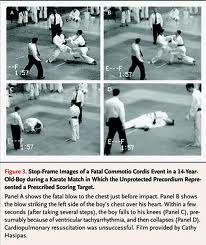