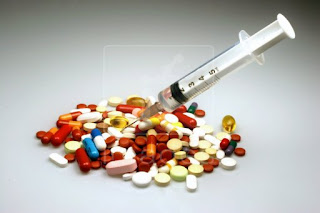 The term diabetes mellitus includes several different metabolic disorders that all, if left untreated, result in abnormally high concentrations of a sugar called glucose in the blood. Diabetes mellitus type 1 results when the pancreas no longer produces significant amounts of the hormone insulin, owing to the destruction of the insulin-producing beta cells of the pancreas. Diabetes mellitus type 2, in contrast, results from insulin resistance. The pancreas of a person with type 2 diabetes may be producing normal or even abnormally large amounts of insulin. Other forms of diabetes mellitus, such as the various forms of maturity onset diabetes of the young, may represent some combination of insufficient insulin production and insulin resistance. Some degree of insulin resistance may also be present in a person with type 1 diabetes.
The treatment goals for type 2 diabetic patients are related to effective control of blood glucose, blood pressure and lipids, to minimize the risk of long-term consequences associated with diabetes. 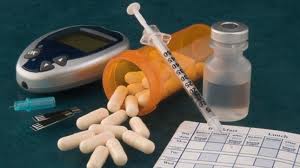 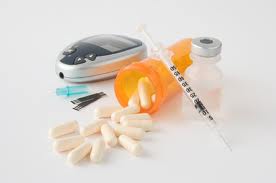 One of the worst and most obvious mistakes being made in conventional medicine today is the aggressive treatment of type 2 diabetes with oral drugs.In recent years, study after study validates  that—oral medications for type 2 diabetes actually do more harm than good. While raising insulin levels and lowering blood sugar, they can have adverse effects on the cardiovascular system and, in some cases, increase the risk of heart attack and death.

One of the two drugs used in the older study, DBI (phenformin), was shown to be so deadly that it was taken off the market. Yet this drug’s close cousin, metformin (Glucophage), which has a near-identical mechanism of action, is the most popular diabetes medication in the country .

The other drug used in the 1969 study, Orinase (tolbutamide), was ultimately tattooed with a black-box warning stating that it dramatically increased the worst complication of diabetes: death from heart attack. Orinase belongs to a class of drugs known as sulfonylureas, which includes dozens of popular medications such as gliclazide, glimepiride, glipizide, and glyburide. The same black-box warning has appeared on all sulfonylureas since 1984.

Another class of diabetes drugs, and the second-most widely used type was thiazolidinediones. The most notorious is Avandia, which increases the risk of heart attack by 40 percent, heart failure by 60 percent, and death by more than 30 percent.

The majority of patients  with type 2 diabetes are taking at least one oral medication.Patients are conditioned to trust their doctors, who have convinced them of the absolute necessity of taking drugs to lower blood sugar. However, once they hear the truth about diabetes drugs, most of the patients opt to stop their medications and adopt a much healthier treatment approach targeted at lowering blood sugar and reducing risk of heart disease. 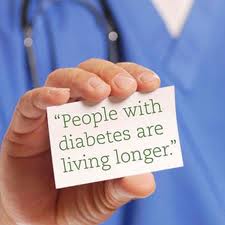 Diabetes is the number one cause of blindness, amputation, kidney failure, and painful and debilitating peripheral neuropathy.It is said that no oral diabetes drug has ever been shown to do anything really good for any patient. No leg, eye, kidney, heart, or brain has ever been spared.
Unlike type 1 diabetes, type 2 is not inherently fatal. It just means you’re walking around with an above-average level of blood sugar. Taking medication that lowers your blood sugar may make you think you’re doing better, but these pills clearly make you worse. 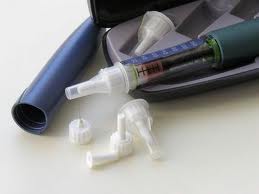 Insulin has the most wonderful reputation among people with type 2 diabetes.Despite recent advances in medical therapy, insulin remains the most potent and effective treatment for elevated blood glucose.  It is a more natural substance than pills (chemically similar to the insulin produced by the body), and lacks many of the potential side-effects inherent to oral medications.
Today, there are more than 15 million people with type 2 diabetes in India, and more than 3 million take insulin.But many more people should probably be taking insulin.

Note-Insulin is not ideal for everyone with type 2 diabetes.  It requires some dexterity to administer the injections.  If the doses are incorrect, it can cause hypoglycemia (low blood sugar).  And if not balanced with sufficient exercise and a healthy diet, insulin tends to cause weight gain.

The facts about diabetes 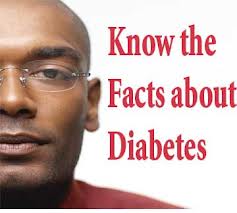 Type 2 diabetes is a progressive condition.  It gets worse over time.  It usually starts out as a state of mild insulin resistance:  the insulin produced by the pancreas is not properly utilized by the body’s cells.  This result is a gradual increase in the blood sugar level, which promotes increased insulin production by the pancreas.  Eventually, the pancreas is unable to make enough insulin to overcome the insulin resistance, and glucose levels rise high enough to require medical treatment.
All this time, the pancreas is working harder and harder to secrete as much insulin as possible.  Just like a machine that is strained and overworked, the insulin-producing cells eventually burn out and cease to function.  This is why the treatment for type 2 diabetes tends to become more aggressive over time.  Initially, many people with type 2 diabetes can control their blood sugar through exercise (which improves insulin sensitivity) and a healthy diet with limited carbohydrates.  Once this fails to achieve desired blood sugar levels, oral medications are often added.  Some medications reduce the amount of sugar produced by the body; some improve sensitivity to insulin; and some stimulate the pancreas to produce as much insulin as possible.  Eventually, the oral medications (combined with diet and exercise) are unable to do the job, and insulin is added to the treatment.

Oral medications really do have their limits.  Unlike insulin, which lowers blood sugar DIRECTLY by causing the body’s cells to absorb insulin from the bloodstream, oral medications work INDIRECTLY.  They only work when the pancreas is able to produce sufficient amounts of insulin.  Once the pancreas is unable to keep up with the workload, no amount of medication is going to solve the problem.  And it really can be a problem.  Elevated blood sugar levels cause short-term problems (tiredness, infection/impaired healing, diminished mental and physical abilities, mood changes) as well as long-term complications (blindness, kidney failure, nerve disorders, heart disease). 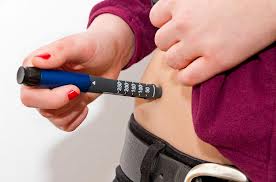 Taking insulin is easier and safer than ever before.  Insulin syringes have short, super-thin needles that you can barely feel.  Insulin can also be administered with an insulin pen:  simply dial up and inject.  Don’t forget… insulin is given into FAT.  Not muscle, not blood vessels, not into any kind of sensitive tissue.  Fat has no nerve endings, so the injection procedure is virtually pain-free.
In recent years, new insulin formulations have come to the forefront.  “Basal” insulin, which works slowly and gradually over an extended period of time (like a time-release capsule), may be enough to get your diabetes in control.  Glargine (brand name Lantus) and detemir (brand name Levemir) are two such insulins.  They are usually taken once or twice daily, and do a good job of controlling blood sugar levels overnight and between meals.  Having insulin working all the time helps to “rest” the pancreas so that it can generate extra insulin at mealtimes.  And because basal insulin does not have a pronounced peak, it rarely causes hypoglycemia (low blood sugar).  In many cases, basal insulin is all that is needed to control the blood sugar throughout the day and night.
In some instances, even with the addition of basal insulin, the pancreas is unable to make enough insulin at mealtimes.  This results in large blood sugar “spikes” after meals and snacks.  Post-meal spikes have been shown to damage blood vessels and contribute to many of the complications of diabetes.  To prevent the spikes, a number of strategies can be used.
Perhaps the most effective solution is to take rapid-acting insulin at each meal, in addition to the usual injections of basal insulin.  This is called an MDI (multiple daily injection) program.  Rapid insulin, including lispro (brand name Humalog), aspart (brand name Novolog) and glulisine (brand name Apidra) is usually taken at the onset of each meal or snack.  Rapid insulin starts working in approximately 15 minutes, peaks (works hardest) in about an hour, and lasts for around 4 hours.  The dose can be adjusted based on the amount of carbohydrate in the meal or snack.  Rapid insulin, just like basal insulin, can be taken via pen or syringe. 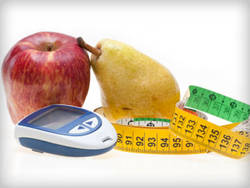 2. Diet: The most therapeutic diet for diabetes is a low-glycemic, Mediterranean-style menu with lots of vegetables and lean protein, such as fish and poultry; modest amounts of fruit (one serving per day); and healthy fats like olive oil. Stay away from sugar and starches—pasta, cereals, and other grain-based foods drive up blood sugar and increase appetite.

4. Nutritional Supplements: To guard against complications of the blood vessels, nerves, eyes, and kidneys, take a potent, antioxidant-rich daily multivitamin to replace the nutrients that are inevitably lost as a result of the diabetic condition. 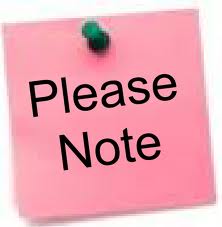 Antidiabetic pills are dangerous to your health.These pills could cost you your life.Do Stop taking anti-diabetic pills as soon as you can; go on a diet and lose weight.Switch over to insulin if you still have diabetic symptoms at or below your ideal body weight. Starting insulin, or taking your insulin program to a higher level, may give you just the results you’re looking for

Talk to your physician about alternative options to oral diabetes drugs. If your doctor isn’t willing to work with you, find another one. Try to remember  type 2 diabetes patients should not have to resort to harmful drugs when safe, natural, alternative treatments are readily available.These steps could mean the difference between life and death.

But don’t lose sight of the fact that diabetes is a disease that requires aggressive treatment.  If your blood glucose level is frequently above target or your HbA1c is above 7 percent, talk to your doctor about intensifying your therapy. 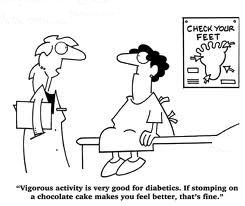