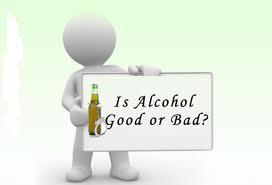 Alcohol has for decades been considered bad for your heart. It's linked to high blood pressure, obesity, diabetes and heart attacks, for a start; and people with heart disease, especially heart disease associated with high blood pressure, are almost always counseled to abstain completely. Recent evidence, though, suggests that people with heart disease might benefit considerably from drinking particular types of alcohol in particular dosages.
So where might alcohol fit in with reducing the risks associated with heart disease?
It's a snug fit, for sure, but research implies it's definitely there. The results have to do with a condition called atherosclerosis. Atherosclerosis is also known as clogging or narrowing of the arteries, and it's the primary cause of heart attacks. Cholesterol is a major contributing factor in atherosclerosis.
Cholesterol is a sticky, fatty substance, and when there's too much in the blood, it gets stuck to the artery walls. This ends up turning into a sticky plaque. Particles in the blood called platelets in turn get stuck to this plaque. Platelets cause your blood to clot so you don't bleed to death whenever to cut yourself. But this clotting ability can be deadly when it happens in the heart. Blood clots in arteries restrict blood flow, so oxygen-rich blood can't get to the heart. That's when a heart attack happens.
In a strange twist to conventional wisdom, it seems alcohol might decrease the chances of developing atherosclerosis and having a heart attack. It seems to have something to do with cholesterol.

Alcohol and the Heart 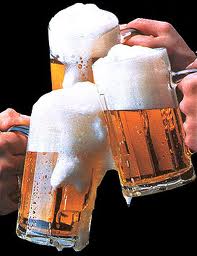 Drinking in moderation is considered to be one of the five heart healthy lifestyle components, together with not smoking, eating a diet low in saturated fats, red meats and high in vegetables grains and fruit, staying slim and exercising regularly.While moderate consumption (one or two drinks a day does not increase the risk of CVD, it is estimated in men that 2% of CHD and 5% of stroke in men is due to excessive drinking. The impact of alcohol consumption in women in developed countries was estimated to be positive - that is, if no alcohol were consumed, there would have been 3% increased CHD and a 16% increase in stroke'.

How does alcohol protect my heart? 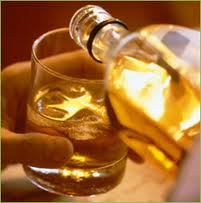 It is all a matter of dose,. A daily drink, in any form, favourably alters the balance of fats or lipids in the blood, by stimulating the liver to produce the 'good' high density lipoprotein cholesterol (HDL). HDL removes the 'bad' low density lipoprotein cholesterol (LDL) from arteries and veins for disposal via the bile, which is referred to as reverse cholesterol transport.
Alcohol also inhibits excessive coagulation or the clotting together of red blood cells by reducing their ‘stickiness’, and facilitates the breakdown of blood clots. 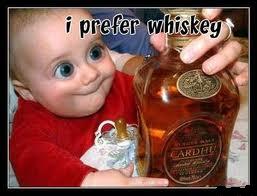 Red wine, dark beer and traditional ciders also contain phenolic compounds or antioxidants. Phenolic compounds also inhibit excessive coagulation and enhance the relaxation of blood vessel walls, allowing better blood flow. Although the phenolic compounds are shown to be antioxidants in the test tube, it is uncertain whether they inhibit the oxidation of LDL cholesterol in animals and humans, and hence prevent the build up of cholesterol in arteries, which is referred to as hardening of the arteries.
Regular moderate alcohol consumption reduces the risk of coronary heart disease and stroke mainly in men aged over 40 years and in post-menopausal women, when the risk factors for coronary heart disease and stroke significantly increase.
Drinking alcohol is not recommended if you have uncontrolled, high blood pressure. If someone has an existing heart condition, alcohol can generally be drunk in moderation, but only if alcohol use does not affect the medication, a doctor’s advice should be sought.
Drinking more than responsibly does not increase the protective effect - and only leads to long term health harms. Drinking heavily can lead to irregular heart beat, sudden heart death and significantly increases the risk of a hemorrhagic stroke. 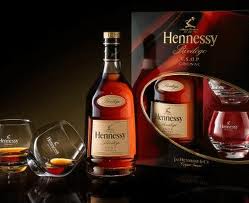 The Mediterranean type diet, high in fruits, vegetables, fish, salad and olive oil and including alcohol in moderation, leads to greater longevity and a significant reduction in heart disease, late on set diabetes and stroke. This type of diet combined with moderate wine consumption, might prevent a second heart attack in middle-aged men. Compared to non-drinkers, men drinking two glasses of wine a day reduced their risk of a second heart attack by 59%. 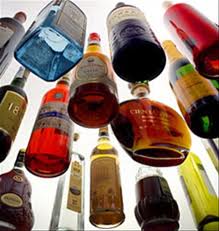 Following the five heart healthy lifestyle factors of staying slim, not smoking, exercising gently daily and eating a balanced diet high in fibre, fruit and vegetables and low in saturated fats and drinking between 1/2 and two drinks a day, more than halves the risk of heart disease, type 2 diabetes and stroke.
Conversely, binge drinking, which is considered to be the consumption of more than 6 standard drinks per drinking session, is seen to significantly increase systolic blood pressure, which significantly increases the risk of coronary heart disease or stroke. 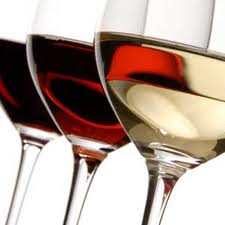 Stroke is one of the leading causes of death and disability in the developed world. While heavy alcohol consumption appears to increase the risk of all types of strokes, moderate drinkers have a reduced risk of stroke compared to non-drinkers and heavy drinkers. Ischaemic strokes account for 85% of strokes. They are caused by blockage of a blood vessel by a clot, which starve the brain of blood and hence oxygen. The anti-coagulatory (clotting) effect of alcohol lasts for approximately 24 hours, and hence regular moderate alcohol consumption is necessary to maintain a reduced the risk of ischaemic stroke.
Other Side of the Story

Most people don't think of alcohol as a drug...but it is. Alcohol abuse has destroyed more lives, broken apart more families, caused more diseases and contributed to more auto fatalities than any other drug. It is the major contributing factor in the growing epidemic of domestic violence.
More than half of all adults drink, but, not everyone who drinks is an alcoholic. Alcholism is a complex psychosocial disease. Those who drink risk becoming an alcoholic. It impairs your judgement and affects the way you think, feel and communicate.
The cause of alcoholism is unknown, but, like heart disease, there are both controllable and uncontrollable risk factors. Having an alcoholic parent is an uncontrollable risk. You are at risk if you are angry, lonely or sad or have few or no friends. Those who are poor or under great stress are also at risk for alcoholism.
Alcohol addiction has 4 characteristics:
Do you wonder if drinking may be a problem for you? Take this quiz to find out. 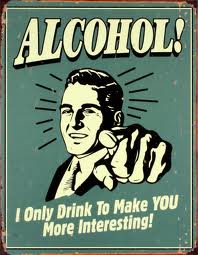 If you answered YES to any of these questions, you need to look carefully at how alcohol is affecting your life and your relationships with others. Discuss your concerns with your primary care doctor.
Bad effects of drinking on heart. 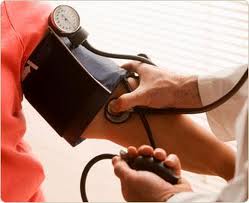 Heavy drinking, particularly over time, can damage the heart and lead to high blood pressure, alcoholic cardiomyopathy, (enlarged and weakened heart), congestive heart failure, and stroke. Heavy drinking puts more fat into the circulation in your body, raising your triglygeride level. That's why doctors will tell you “If you don't drink, don't start”. There are other, healthier ways to reduce your risk of heart disease like eating right, getting regular exercise and maintaining a healthy weight.
For some, no amount of alcohol is safe to take in. It is highly addictive and, as tolerance level increases, control decreases.

Moderate drinking may be different for some? 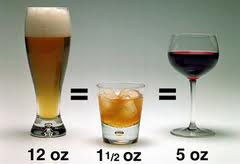 What's “Moderate Drinking” for one may be legally drunk for another. By nature's design, a woman's body metabolizes alcohol differently so that 1 alcoholic beverage in a woman is equal to 2 in a man. Alcohol remains in a woman's body longer than in a man's. Also, the older you are, the less efficient the body can metabolize alcohol. Many states have revised their drunk-driving laws and 0.08 percent is considered to be intoxicated. Women, especially women of small stature, must be alert to these laws and metabolic differences when drinking, and limit their alcohol intake accordingly.
Other Medical Consequences of Alcoholism 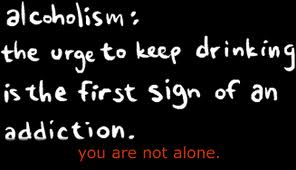 Studies show that alcoholics have a worse outcome after undergoing surgical procedures. The reasons for this are not entirely clear. Poorer outcomes may be attributed to a poorer general state of health with malnutrition and the depressant effects of alcohol. Binge drinking (consuming large amounts of alcohol infrequently, such as on weekends) places one at risk for atrial fibrillation which may also be a factor in surviving surgery. Still another factor is that heavy drinking affects the body's ability to stop bleeding. A liver damaged by alcohol has trouble making clotting proteins.
Alcohol interacts with many drugs - both prescription and non-prescription. Mixing alcohol with your medicine can lead to serious untoward effects.
Alcoholism increases risk of cancers, including breast cancer, lung cancer and cancer of the liver.
Long-term heavy use of alcohol destroys the cerebellum of the brain, causing irreversible brain damage and resulting in slowed thinking, an unsteady walk and slurred speech.
Alcoholism contributes to many diseases, including hepatitis, cirrhosis, malnutrition, pancreatitis, stomach ulcer, fetal alcohol syndrome and heart disease, just to name a few.

Cutting back on drinking or abstaining altogether isn't easy. If you have a physical dependence on alcohol, you most likely need medical assistance to help you to break the habit. If you feel you just drink too much as a pattern of behavior you've slipped into, then, here are some tips to replace drinking behaviors with more healthful ones:


In the end i would like to add if you drink please do in moderation as a thin line exists between moderate drinkers,heavy drinkers and alcoholics.Do remember Alcoholism is treatable but only if the person who is drinking is willing to admit he/she has a problem and is willing to accept help. Alcoholism is a disease that is characterized by denial, so, while you may not be able to change the behavior of someone you love, you still need to get help for yourself because alcoholism becomes a family illness. 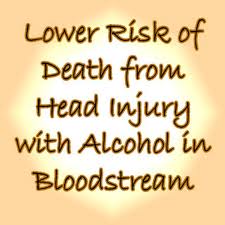