Appendicitis is a painful swelling and infection of the appendix.

What is the appendix? 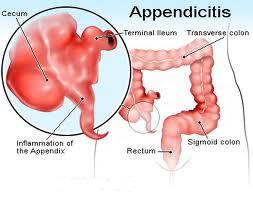 What are the symptoms of appendicitis? 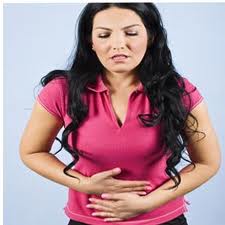 The symptoms can be extremely variable but often take the following classic pattern. The first sign is usually a pain or discomfort in the centre of the abdomen. This pain comes and goes in waves and is often thought at first to be a simple stomach upset.
After a few hours, the pain becomes more noticeable and constant in the lower right part of the stomach. It is increased by movement or coughing. The patient often loses their appetite, feels sick, and vomits. The temperature is raised and the complexion becomes flushed. The breath .may smell offensive

How is appendicitis diagnosed?

The doctor takes a medical history from the patient and checks their temperature.Blood and urine tests are performed to look for infection.
The doctor examines the patient by pressing on the lower right part of the abdomen and sometimes by inserting a finger in the anus (back passage) in order to exclude other causes of pain. Women are often given a vaginal examination.
There is no one test that will diagnose appendicitis with certainty. Surgery is performed on the basis of the doctor's examination and results of the tests. Many diseases can cause the same symptoms as appendicitis which is why surgeons find a normal appendix in 3 out of 10 operations.
How is appendicitis treated?

Surgery
Typically, appendicitis is treated by removing the appendix. If appendicitis is suspected, a doctor will often suggest surgery without conducting extensive diagnostic testing. Prompt surgery decreases the likelihood the appendix will burst.
Surgery to remove the appendix is called appendectomy and can be done two ways. The older method, called laparotomy, removes the appendix through a single incision in the lower right area of the abdomen. The newer method, called laparoscopic surgery, uses several smaller incisions and special surgical tools fed through the incisions to remove the appendix. Laparoscopic surgery leads to fewer complications, such as hospital-related infections, and has a shorter recovery time.
Surgery occasionally reveals a normal appendix. In such cases, many surgeons will remove the healthy appendix to eliminate the future possibility of appendicitis. Occasionally, surgery reveals a different problem, which may also be corrected during surgery.
Sometimes an abscess forms around a burst appendix—called an appendiceal abscess. An abscess is a pus-filled mass that results from the body's attempt to keep an infection from spreading. An abscess may be addressed during surgery or, more commonly, drained before surgery. To drain an abscess, a tube is placed in the abscess through the abdominal wall. CT is used to help find the abscess. The drainage tube is left in place for about 2 weeks while antibiotics are given to treat infection. Six to 8 weeks later, when infection and inflammation are under control, surgery is performed to remove what remains of the burst appendix. 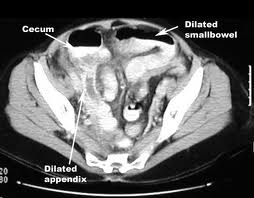 Nonsurgical treatment may be used if surgery is not available, if a person is not well enough to undergo surgery, or if the diagnosis is unclear. Some research suggests that appendicitis can get better without surgery. Nonsurgical treatment includes antibiotics to treat infection and a liquid or soft diet until the infection subsides. A soft diet is low in fiber and easily breaks down in the gastrointestinal tract.

With adequate care, most people recover from appendicitis and do not need to make changes to diet, exercise, or lifestyle. Full recovery from surgery takes about 4 to 6 weeks. Limiting physical activity during this time allows tissues to heal. 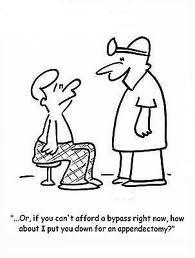