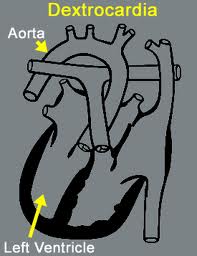 A rare anomaly where the heart is located on the right side of the chest instead of the normal left side of the chest. The condition is generally asymptomatic but is often associated with other abnormalities such as inverted location of other abdominal organs.  It is present at birth (congenital).


There are several types of dextrocardia, also called looping defects. Dextrocardia is frequently diagnosed in a routine prenatal sonogram, although not every radiologist will catch it, particularly if there are no cardiac structural abnormalities.


Mirror image dextrocardia is a very rare condition. It may be present in about one in 100,000 people. In this looping defect, not only does the heart flip the wrong way and develop on the wrong side of the chest, but also all the other organs in the middle of the body are reversed. In essence, an x-ray of mirror image dextrocardia looks like a mirror image of the normal heart and organ placement.
Mirror image dextrocardia was first noted in the 1920s, when x-rays revealed this abnormal placement. Fortunately, this type of looping defect does not involve structural abnormalities of the heart or other organs. In some cases, cilia, tiny hair-like structures, in the nose and lungs move in the opposite direction, causing a greater susceptibility to colds or illness. Aside from this susceptibility, a person with this condition does not require any special treatment or surgeries.
The most common heart defects seen with dextrocardia include:
Dextrocardia with abnormal heart is a far more serious condition, which usually requires one or more surgeries to address structural abnormalities. It is a more common condition than mirror image dextrocardia, and in most cases, the position of the other organs in the middle of the body is not reversed. The outcome and survival rates for dextrocardia with abnormal heart depends upon the severity of the defects, which generally include a complicated form of transposition of the arteries, called levo-transposition, or both arteries arising from the right ventricle, called double outlet right ventricle.

Large ventricular septal defects are also common in dextrocardia with abnormal heart. The right and left ventricle may be so similar, unlike in the normal heart, that it is difficult to differentiate which ventricle is right or left. In many cases, the ventricular septal defect is so large that the ventricles are termed a single ventricle. One or both ventricles may be smaller than usual.
Dextrocardia may also be present in a condition called heterotaxy, which involves not only abnormal heart placement and structural abnormalities, but also the absence of a spleen, or the presence of a number of small spleens. Treatment depends upon the degree and severity of these structural anomalies. Lack of a spleen, asplenia, can complicate any operations because natural resistance to infection is significantly reduced. 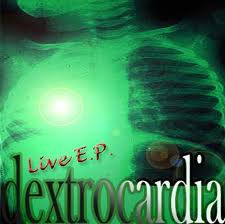 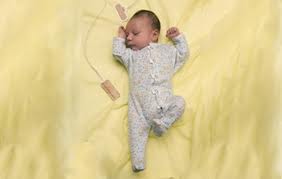 There are no symptoms of dextrocardia if the heart is normal.
Conditions that may include dextrocardia may cause the following symptoms:
by Dr.Uday D.Nair